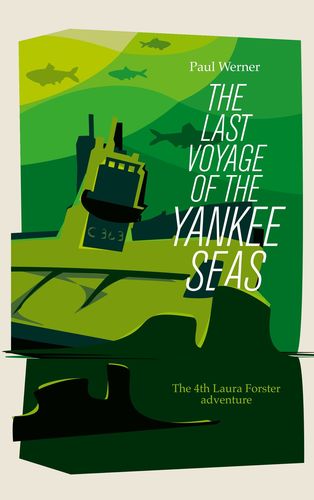 The Last Voyage of the Yankee Seas

Mehr erfahren
Beschreibung
Crime scene: Sweden and the Baltic. A harmless enough accident puts Laura on the scent of a murder whose traces lead back to those nineteen-eighties, which risked seeing the Cold War go red hot all of a sudden: from NATO´s double-track agreement, SS20 and Pershing cruise missiles, Strategic Defence Initiative, also known as Star Wars, all the way to the Fall of the Berlin Wall and the implosion of the USSR - those were the catchphrases of that turbulent decade.
For neutral, yet politically rollercoasting Sweden beyond ABBA and Pippi L., it all boiled down to the bizarre episode known as "Whiskey on the Rocks," aka the grounding of S-363, by whose sombre, silent shadow Laura and her sister Solitaire are being guided to the nest of the Grey Albatrosses, a Rotary of the international crime élite presided over by the mysterious Schramm.
As always, the name Laura Forster vouches for exciting as well as humorous entertainment, seasoned, this time, with an unabashed homage to the unique biotope of the Stockholm and Åland Island skerries, Morlockian submariners and the endangered species of Tall Ship sailors.
Autor/in

Born 1945 in Altensteig, Northern Black Forest region, Paul Werner grew up in Wuppertal.
A Naval ensign set for a professional military career, he left the German Armed Forces in reaction to the 1967 assassination of Berlin student Benno Ohnesorg, whose murder had, in the opinion of quite a few Germans, been brushed under the carpet by both politics and the judiciary.
Having studied English and Russian philology in Wuerzburg and Bonn and obtained his degree in 1972, Paul Werner did not take up grammar-school teaching, however, but seized the opportunity of becoming a conference interpreter with the EU-Commission in Brussels, instead.
Studying law at the Open University in parallel to his working from eight "passive" languages into German and English, he did stints of varying duration in European capitals and cultures such as London, Copenhagen, Athens, Moscow, and Istanbul.
Married to a Dane, he visited Scandinavia and not least Norway on a regular basis both by boat, car, and aeroplane.
Having dabbled in the concoction of articles and essays both in German and English ever since his military and student days, Paul Werner, meanwhile a pensioner, has for more than a decade devoted himself almost exclusively to the writing of essays on "sea lore" and adventure novels with a criminal leaning.
A divorced dad of three adult daughters, Paul Werner today lives in Heidelberg, a pretty far cry from the sea.